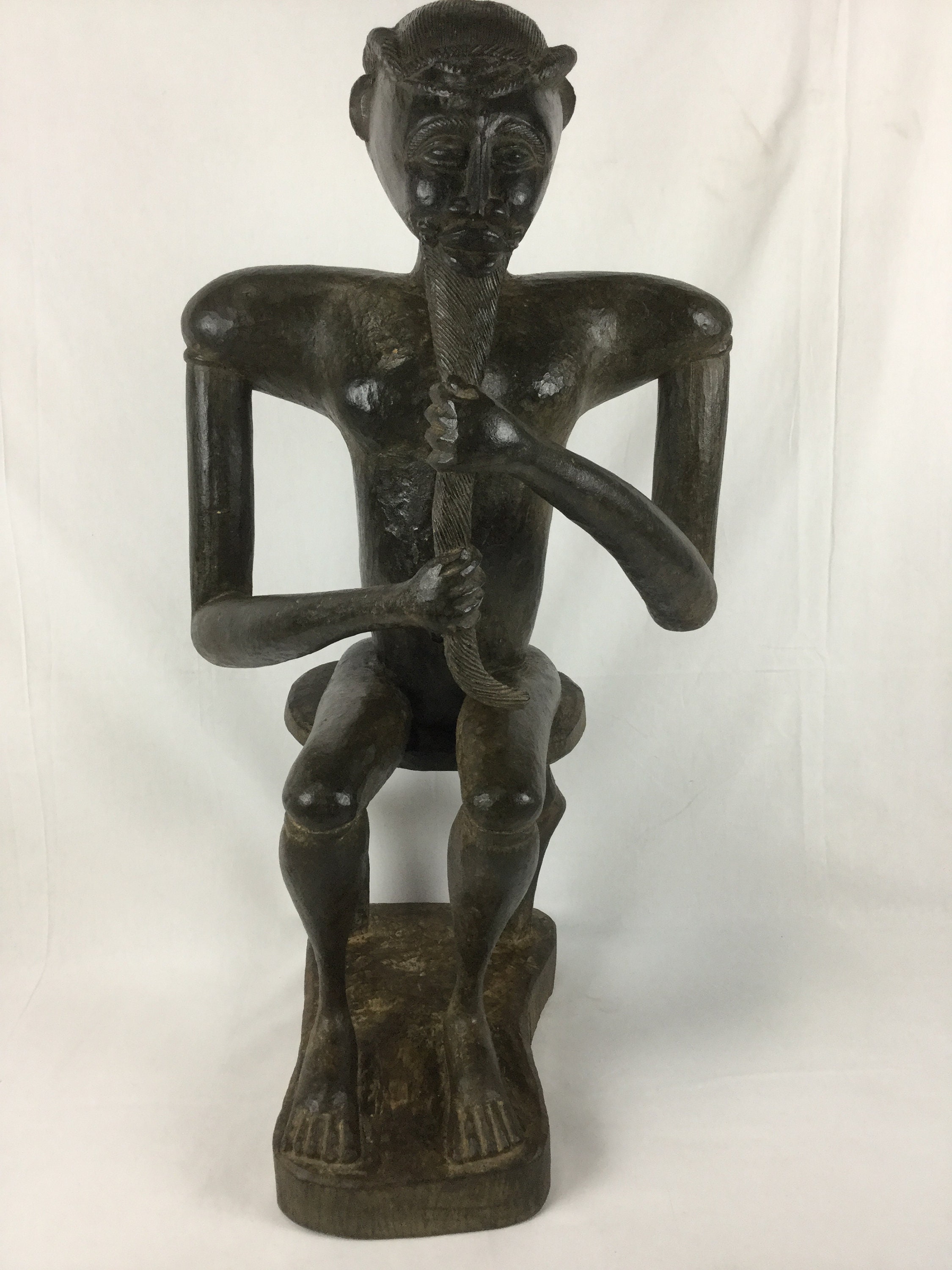 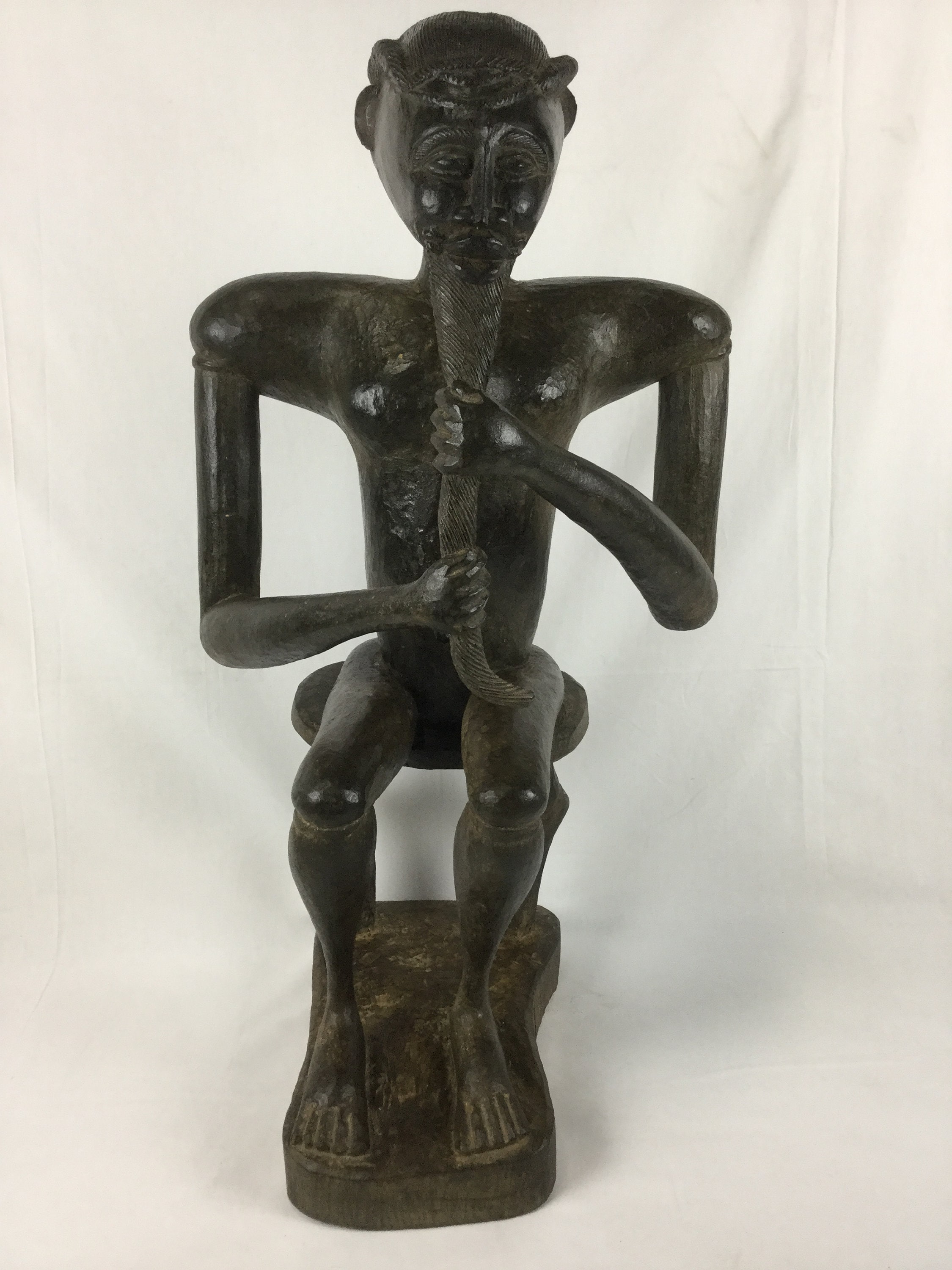 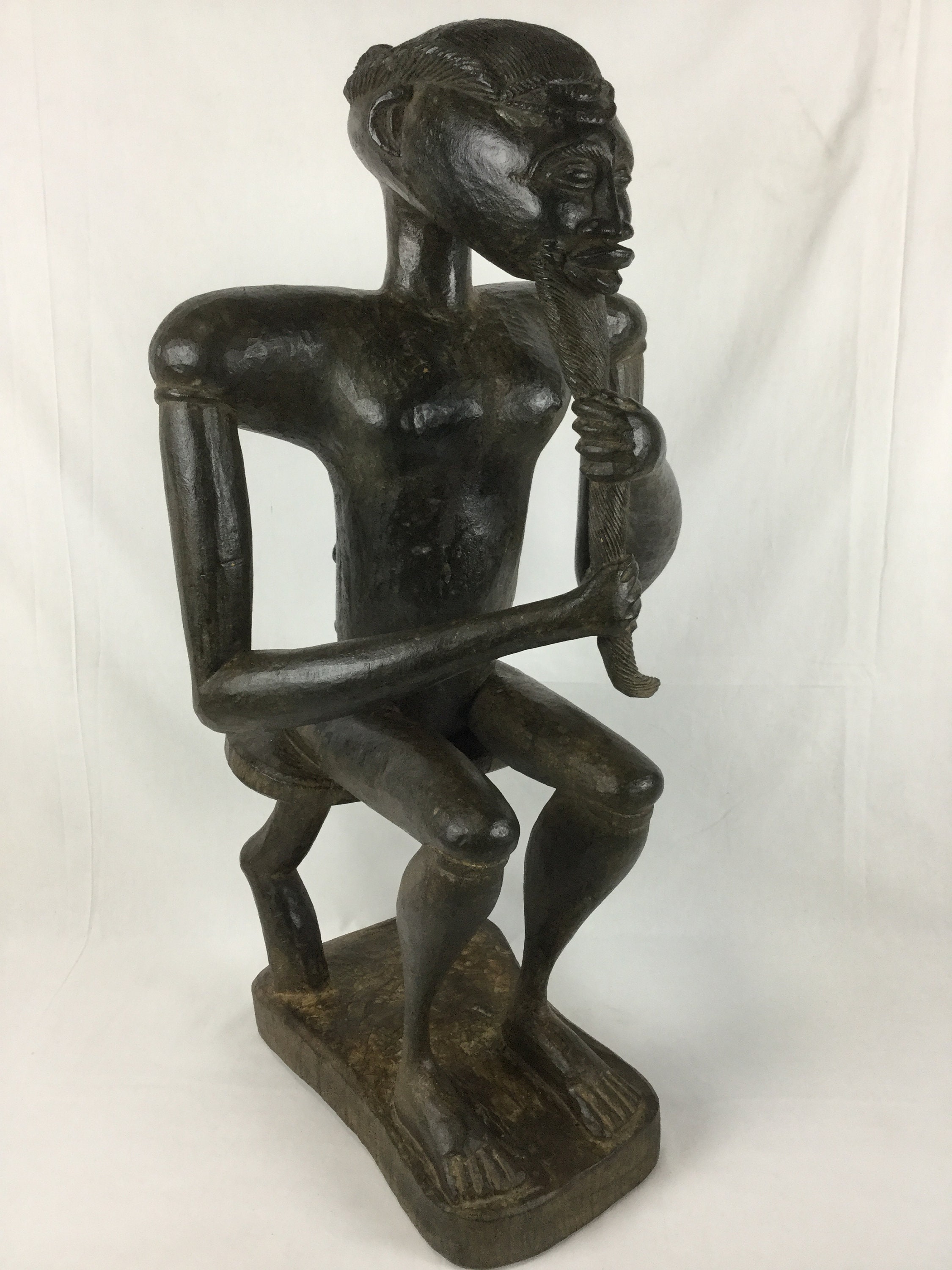 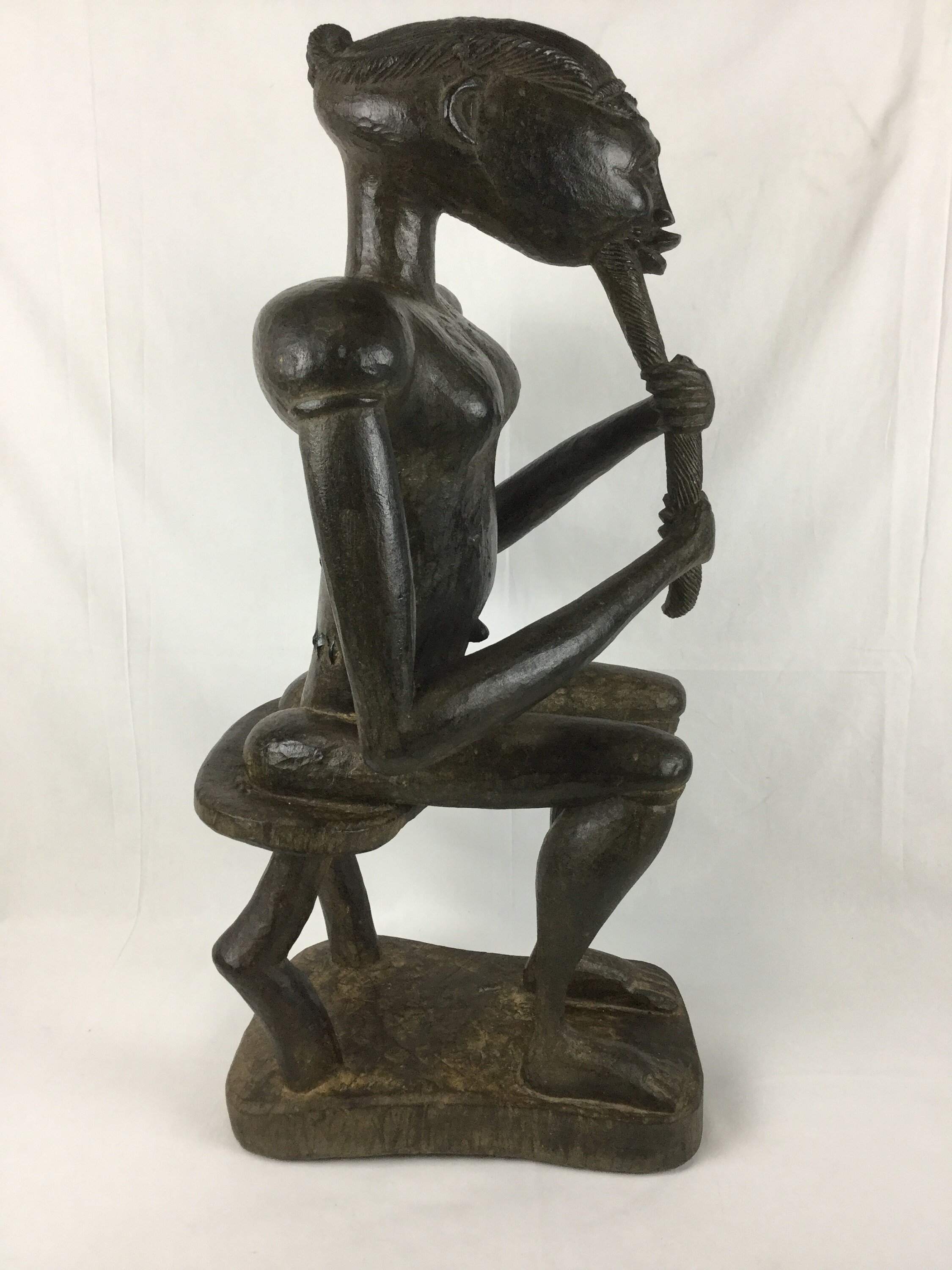 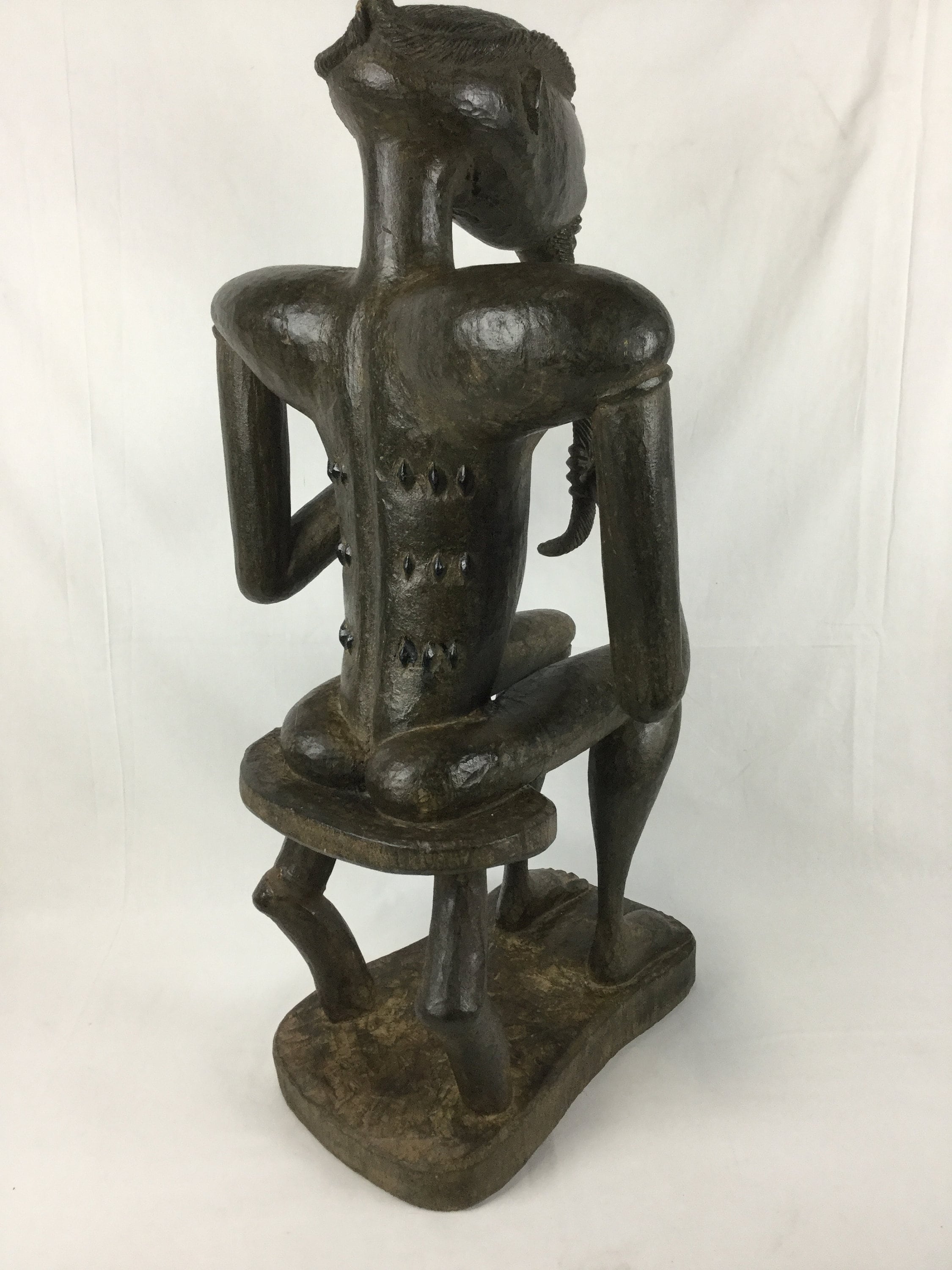 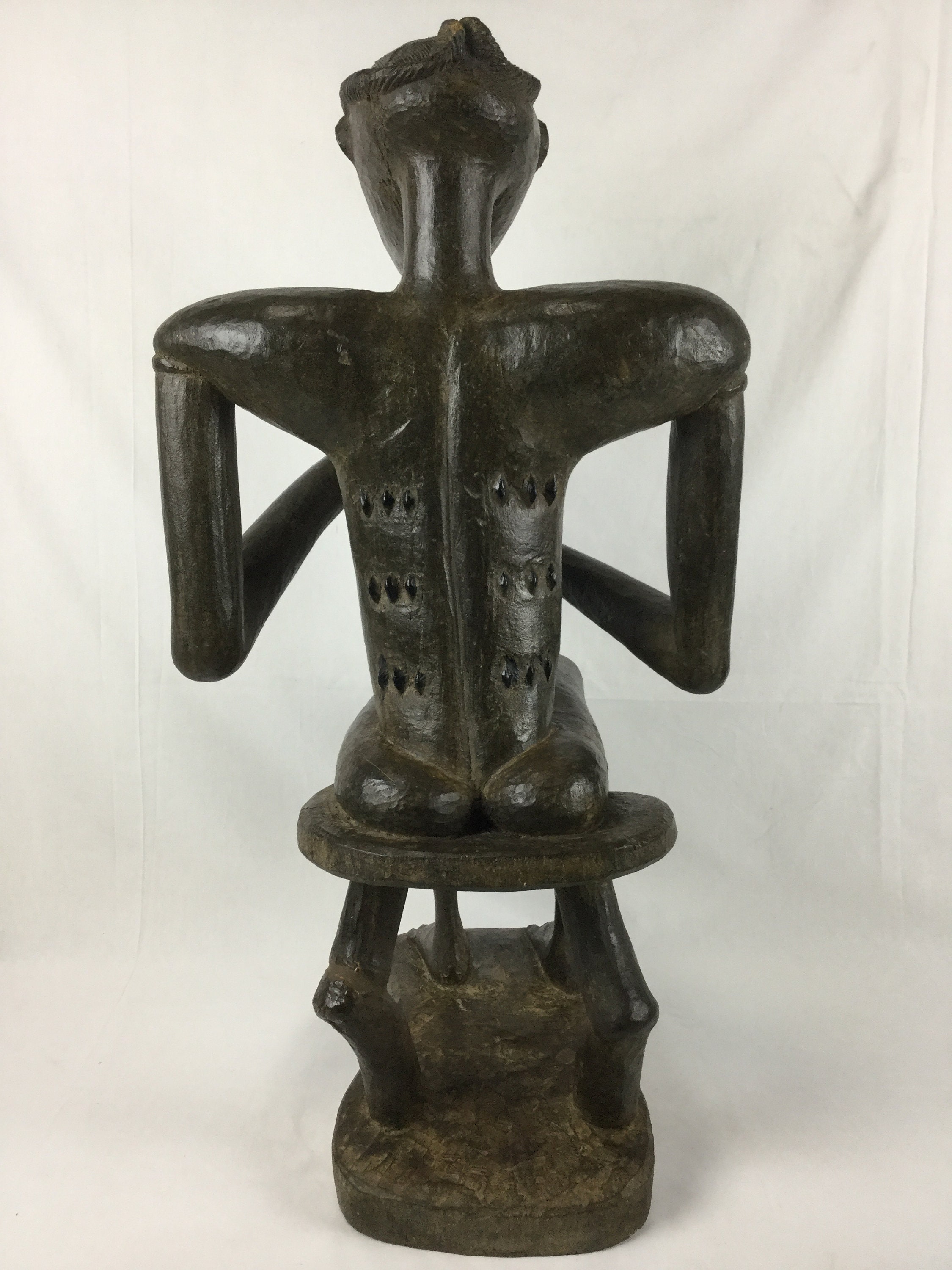 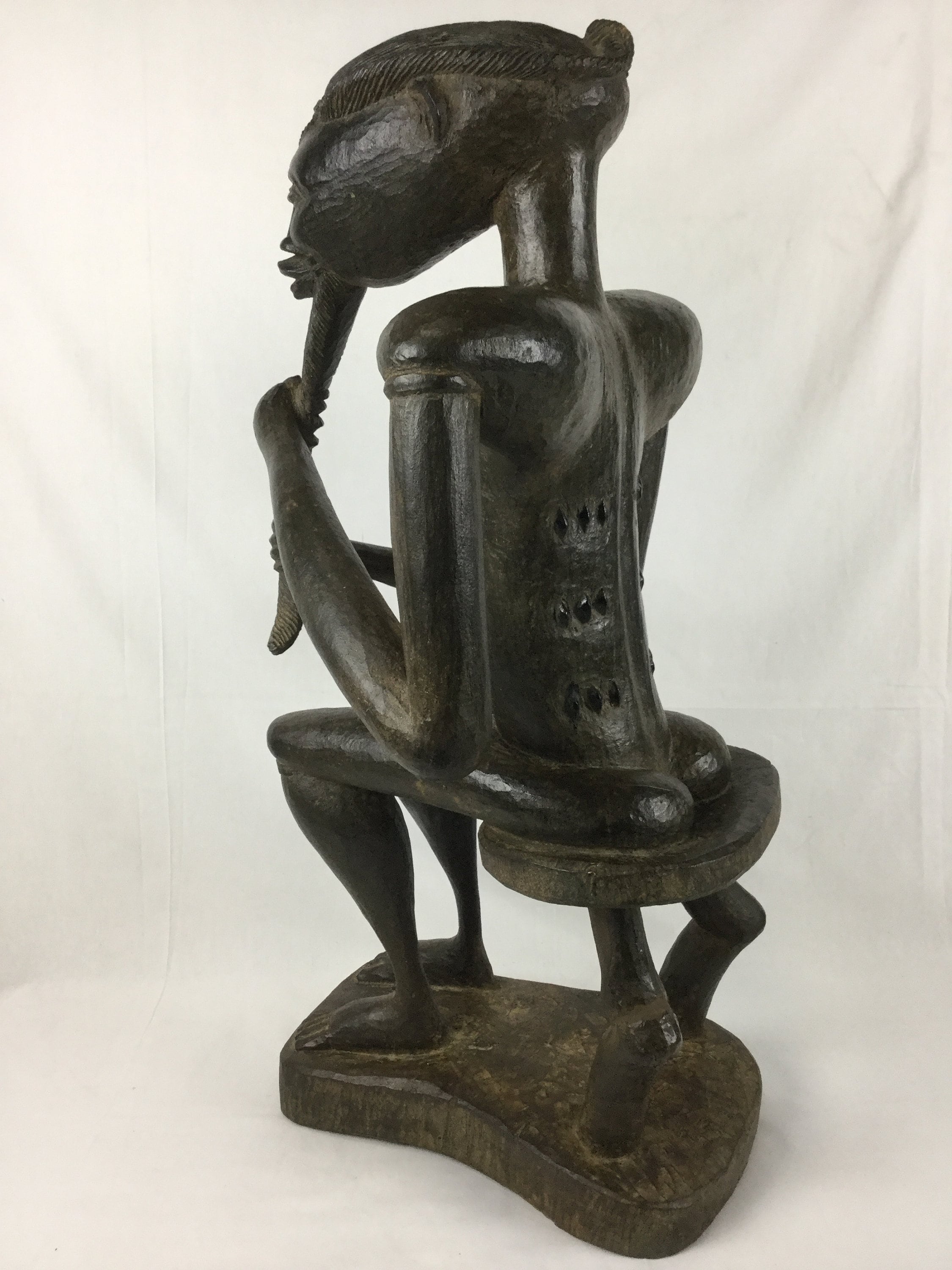 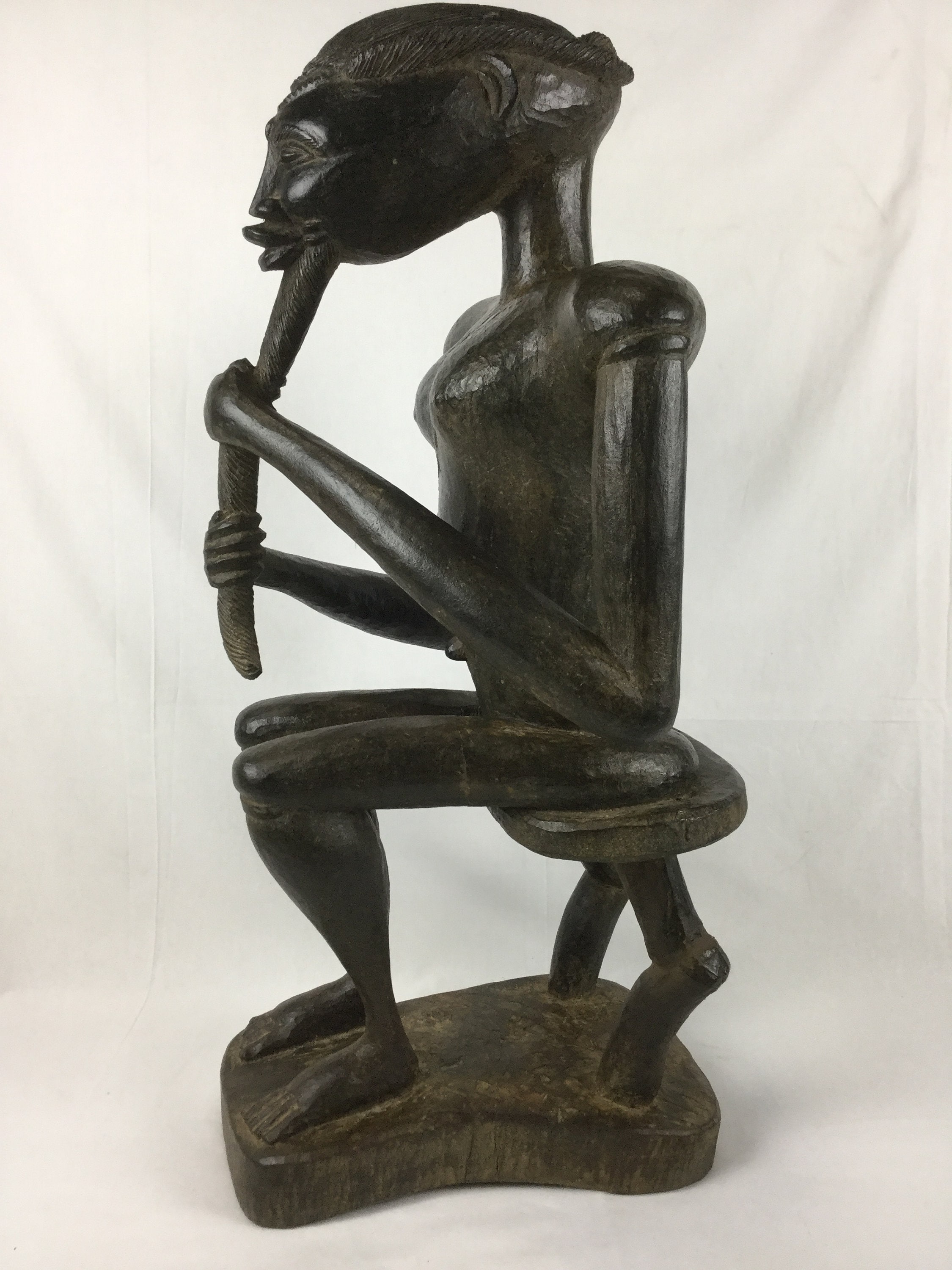 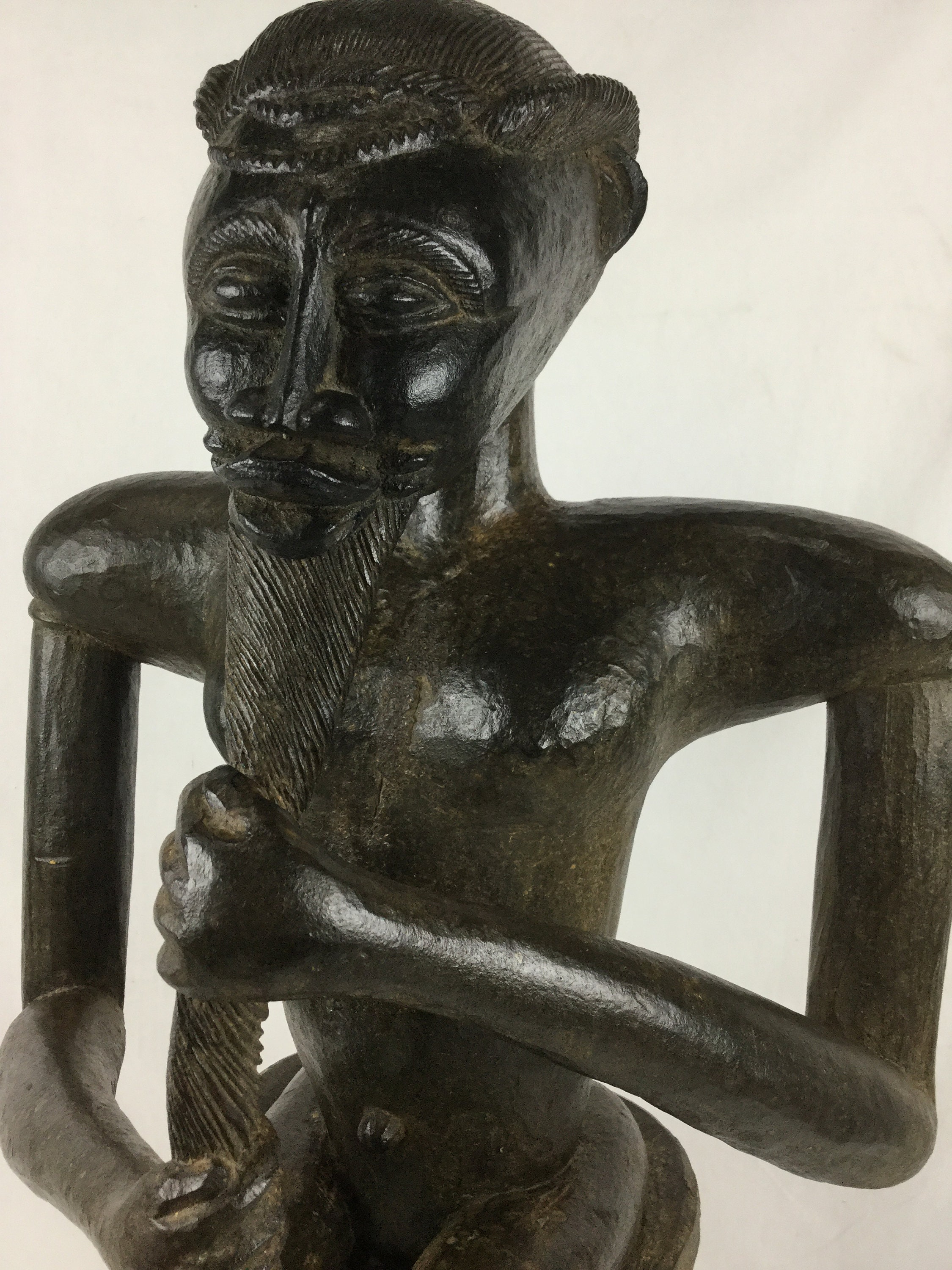 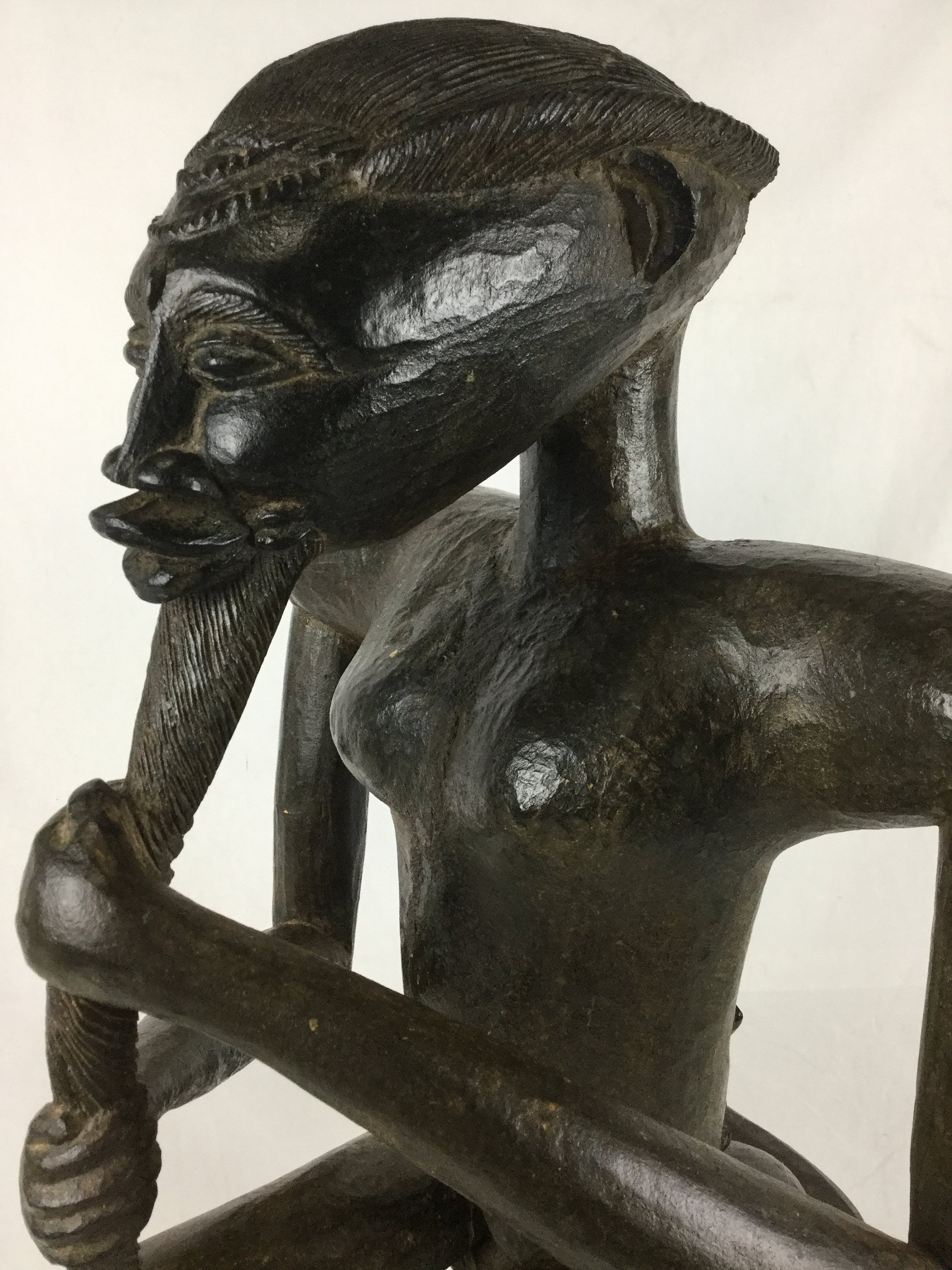 This amazing piece weighs approximately 5 lbs, which dates the piece.

The Satimbe mask is a mask danced in the Dogon culture to represent women ancestors, an elder or grandmother figure. Dogon masks are box-shaped, and a figure is placed on top of the mask, which represents the woman. Representations of the woman can be anywhere from what her role is in the community, what she wishes to be, her strengths, her weaknesses and so on. The masks appear at funerals to usher the spirits of the dead from the village to the bush where they belong, thus restoring the order of the world. The Satimbe mask is made from wood, fiber and a pigment costume.
For international shipping, please send us an email at tongueinchique [!at] yahoo.com for a shipping quote.
The key spiritual figures in the religion were the Nummo/Nommo twins. According to Ogotemmêli's description of them, the Nummo, whom he also referred to as the Serpent, were amphibians that were often compared to serpents, lizards, chameleons, and occasionally even sloths (because of their being slow moving and having a shapeless neck). They were also described as fish capable of walking on land; while they were on land, the Nummo stood upright on their tails. The Nummos' skin was primarily green, but, like the chameleon, it sometimes changed colours. It was said to at times have all the colours of the rainbow.[16]

In other instances, the Nummo were referred to as "Water Spirits".[17] Although the Nummo were identified as being "Dieu d'eau" (gods of water) by Marcel Griaule, Ogotemmêli identified the Nummo as hermaphrodites and they appeared on the female side of the Dogon sanctuary.[18] They were primarily symbolized by the sun, which was a female symbol in the religion. In the Dogon language, the sun's name (nay) had the same root as "mother" (na) and "cow" (nā).[19] They were symbolized by the colour red, a female symbol.
Also, Please Visit our policy pages.
Dogon art is primarily sculpture. Dogon art revolves around religious values, ideals, and freedoms (Laude, 19). Dogon sculptures are not made to be seen publicly, and are commonly hidden from the public eye within the houses of families, sanctuaries, or kept with the Hogon (Laude, 20). The importance of secrecy is due to the symbolic meaning behind the pieces and the process by which they are made.
Thank You
Tongueinchique [!at] yahoo.com